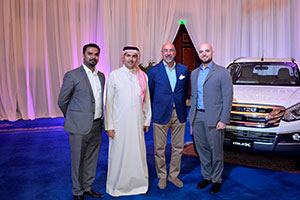 Motorcity, the exclusive dealer of Maxus vehicles in the kingdom of Bahrain, launched the 2018 Maxus T60 pickup, the latest and most high-tech pickup in the Maxus range of commercial vehicles.

Motorcity, the exclusive distributor of a wide range of commercial and passenger vehicle brands in Bahrain, organised an exclusive event for major companies interested in holistic fleet management solutions.